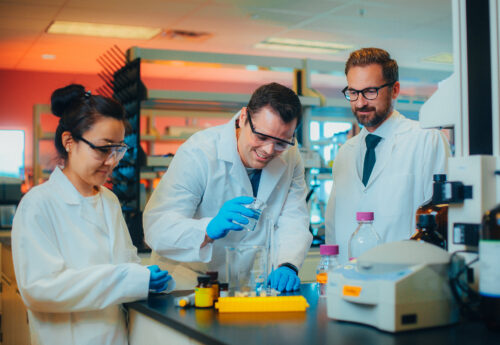 Dr. Le received a B.A. degree in Molecular and Cell Biology (Biochemistry & Molecular Biology) from the University of California, Berkeley in 1998 and a Ph.D. degree in Biochemistry and Molecular Biology from the University of Chicago in 2005. His graduate research was conducted in the lab of Dr. Philippe Cluzel, who is currently a Gordon McKay Professor of Applied Physics at Harvard University. He completed a post-doctoral fellowship with a Ruth L. Kirschtein National Research Service Award at Purdue University in 2010. His post-doctoral training was mentored by Dr. Ji-Xin Cheng, who is currently a Moustakas Chair Professor in Photonics and Optoelectronics at Boston University. He served as an Assistant Member at the Nevada Cancer Institute from July 2010 to January 2012 and Assistant Research Professor at the Desert Research Institute from February 2012 to May 2014. He joined Roseman University of Health Sciences as an Assistant Professor since July of 2014.

Take The Next Step