This fall, Roseman University of Health Sciences awarded its 2022 Hero Scholars at events held on its Henderson, Nevada and South Jordan, Utah campuses. Nine students accepted into the university’s Colleges of Pharmacy and Nursing were each awarded onetime $10,000 scholarships funded by the University in partnership with generous community partners and donors. Each scholar was selected based on their academic promise, financial need, community volunteerism, and leadership skills.

“In its second year, the Hero Scholars program was created during the COVID-19 pandemic to identify and reward future frontline healthcare professionals who selflessly volunteer to help improve their communities,” said Renee Coffman, PhD, Roseman University’s president and co-founder. “We are grateful for our community partners who have joined us in nurturing these students who have demonstrated heroic attributes in their everyday lives.”

The 2022 Roseman University Hero Scholars are: 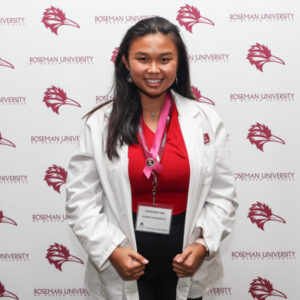 A pre-pharmacy graduate of University of Hawaii at Manoa, Tan studied molecular biosciences and biotechnology. For more than 12 years, she volunteered with ABLE Special Needs Outreach, which paired her with individuals with intellectual and developmental disabilities to initiate group-building activities. Tan is enrolled in the Doctor of Pharmacy program at Roseman’s Henderson campus. Her Pharmacy Hero Scholarship was supported by the Valley Health System. 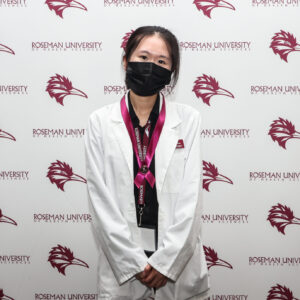 Lin earned a bachelor’s degree in biochemistry and molecular biology from the College of Agriculture, Biotechnology and Natural Resources at University of Nevada, Reno. As a member of the university’s Medical Student Association, Lin participated in many community events such as collecting canned food and supplies for the homeless, preparing Thanksgiving dinners for health professionals and fundraising for a Student Outreach Clinic that provides free primary care to the uninsured. She also volunteered in a research lab conducting experiments related to obesity. With her Pharmacy Hero Scholarship supported by Martin and Robert Stolman, Lin is now earning her Doctor of Pharmacy at Roseman’s Henderson campus. 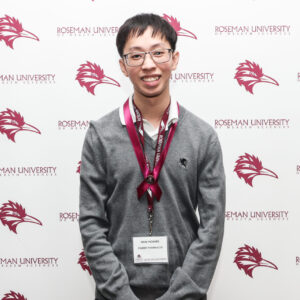 Hoang earned a Master of Science in Biotechnology from University of Nevada, Reno where he also served as a lab researcher. He also served as a Research Assistant at University of Nevada, Las Vegas where he was a graduate student. During his time at UNR, Hoang performed more than 500 hours of community services over four years as a member of Circle K International, a collegiate service organization that is a service leadership program of Kiwanis International. Hoang is earning a Doctor of Pharmacy at Roseman’s Henderson campus. He was awarded the Pharmacy Hero Scholarship supported by the Steinberg Family Foundation. 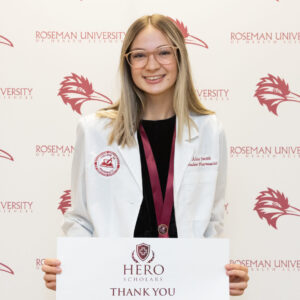 Recipient of a Pharmacy Hero Scholarship supported by Martin and Robert Stolman, Smith is enrolled in the Doctor of Pharmacy program at Roseman’s South Jordan campus. She recently graduated from Weber State University where she majored in chemical technician sciences and biochemistry. During her time at Weber State, Smith was active in the Emerging Leaders program, working on community projects with Ogden Rescue Mission, Help Me Grow Utah and other organizations. She also served as the University’s Pre-Pharmacy Club president, planning and hosting seminars, activities and events for members. 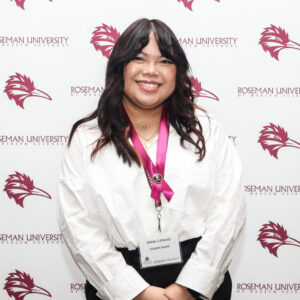 Born and raised in the Philippines before immigrating to California, Cataag witnessed the environmental impact of deforestation and other harmful activities on communities, including natural disasters such as landslides and floods. While attending community college in California, she became involved in Hands-on Earth, an environmental club that raises awareness about sustainability. There she volunteered at a community garden and eventually became interested in food waste and helped raise money for a composting project at her college. Additionally, Caatag volunteered as a tutor for the MESA (Mathematics, Engineering, Science Achievement) club. She earned an associate degree in social and behavioral sciences from College of the Canyons in Santa Clarita and a bachelor’s degree in global disease biology from University of California, Davis. She is earning a Bachelor of Science in Nursing at Roseman’s Henderson campus. She is the recipient of a Nursing Hero Scholarship supported by Cure 4 The Kids Foundation. 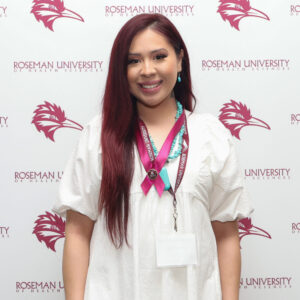 Pelayo grew up in East Las Vegas where at the age of 14 she joined Leaders of the Future where she volunteered at summer day camps and served food for the Salvation Army. While in high school, she volunteered for Opportunity Village and The Shade Tree and later, while studying pre-nursing at University of Nevada, Las Vegas, she collected donations for her hometown and tribe, the Cedar Band of Paiutes in Cedar City, Utah. The poverty within the reservation sparked her interest in pursuing a career in healthcare. Recipient of a Nursing Hero Scholarship supported by Comprehensive Cancer Centers of Nevada, Pelayo is earning her Bachelor of Science in Nursing at Roseman’s Henderson campus. 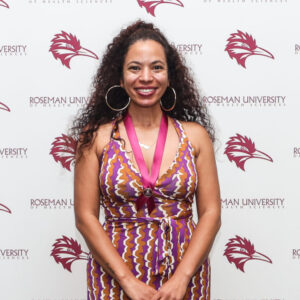 An international business and finance graduate from California State University, Dominquez Hills, Walton recently completed her pre-nursing courses at Saddleback College in Mission Viejo, California. Her commitment to volunteerism began at the age of seven when her father, an avid cyclist and volunteer, encouraged her to volunteer for the American Lung Associations (ALA) Bike Trek fundraiser to funds for lung disease research and patient care. Her volunteerism with the organization continued for more than a decade. In high school she volunteered as a tutor and dance teacher for underserved children in her hometown of Inglewood, California. Walton is earning her Bachelor of Science in Nursing at Roseman’s Henderson campus. She is the recipient of a Nursing Hero Scholarship supported by the Las Vegas Aviators. 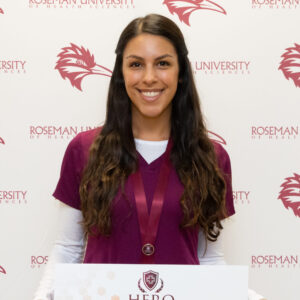 Over the last two years, Martinez has volunteered with the Joy In Birthing Foundation in Los Angeles, California, providing free doula services to women associated with low-incomes, the foster care system, homeless shelters, and teenagers. In her role as volunteer, she helps educate and guide women to make informed decisions regarding their antenatal needs. Martinez earned a bachelor’s degree in human biology from University of California, Merced. She is earning a Bachelor of Science in Nursing at Roseman’s South Jordan campus with the goal of becoming a nurse-midwife. She is the recipient of a Nursing Hero Scholarship supported by Jon Moss and RBM Services. 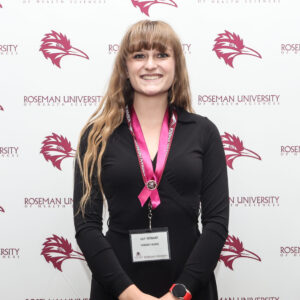 Since the age of nine, Seebart has volunteered as a certified referee and mentor with AYSO’s special needs soccer program serving youth on the Autism Spectrum, Downs Syndrome as well as a myriad of genetic disorders. Beginning in elementary school and throughout high school, she volunteered for clothing drives benefiting local homeless shelters. Seebert is a pre-nursing graduate from Cuesta College, where she also earned an associate degree in liberal arts. Recipient of a Nursing Hero Scholarship supported by the Vegas Golden Knights and Henderson Silver Knights, Seebart is earning her Bachelor of Science in Nursing at Roseman’s Henderson campus.

Winter SpectRUm: Letter from the President

From the Winter 2022 print issue of SpectRUm. Advancing the health and wellness of the communities we serve is a key tenet of the mission of Roseman University. We accomplish…

From the Winter 2022 print issue of SpectRUm. In 2019, Roseman’s new Dental clinic, adjacent to the Orthodontic clinic in Henderson, opened its doors as home of the Advanced Education…